Fuel cell or battery trucks to collect waste? Both types are increasingly found in municipal waste disposal companies. We inquired in Freiburg and Munich where a waste management company is currently testing two fuel cell waste collection vehicles, the other a fully electric dump body.

The waste management company (ASF) from Friborg has been working with various electric vehicles for many years. To date, it has deployed 17 vehicles: small sweepers, forklifts, vans and cargo bikes of various brands, with battery capacities designed for daily trips of up to 100 kilometers. By 2030, ASF aims to have converted its fleet of around 170 vehicles, including company cars, to alternative propulsion systems.

ASF recently started using two waste collection vehicles from the German company Faun Umwelttechnik powered by fuel cells and with a payload of eleven tonnes. “I am convinced that in the heavy-duty vehicle sector, fuel cells are more forward-looking than pure e-drives,” says Michael Broglin, CEO of ASF. According to the general manager, the payload of the new eleven-ton collection vehicle is as high as a conventional-powered diesel truck. Its range of around 200 kilometers also meets the requirements of daily circuits.

Besides the environmental aspect, these two factors were decisive in the choice of fuel cell vehicles. With the two Faun trucks, ASF was able to save up to 60 tonnes of CO2 per year during the daily collection of organic and paper waste. “We have also achieved significantly lower noise emissions for our drivers and the waste workers behind the vehicles no longer stand in the exhaust – their reaction has so far been positive everywhere,” says Broglin. Drivers who have used H2 vehicles no longer want to change. A further twelve collection vehicles with climate-friendly technology are expected to be used in Freiburg by the end of 2023.

Faun, a commercial vehicle manufacturer based in Osterholz-Scharmbeck, has been adapting fuel cells for commercial vehicles for several years at its headquarters in the north of Bremen. In the Faun Bluepower chassis, fuel cells are combined with a battery. In Freiburg models, the fuel cell has 30 kW and the energy content of the battery is 85 kWh. The latter provides additional energy during acceleration and absorbs recovery energy – an elementary task in the daily stop-and-go traffic of waste management.

“We chose the fuel cell variant because we can recharge the vehicles and refuel them with hydrogen. For the moment, we are managing with one tank filling per week, ”the general manager tells us. The capacity of the hydrogen tank is 16.4 kilograms at 700 bar. He says no green hydrogen from renewable energy is available yet, but that is expected to change soon. “Otherwise, things won’t work out,” said Broglin. Currently, ASF’s power supply is being converted to medium voltage to ensure better power supply. In this course, the charging infrastructure, including charging management, will also be adapted. In total, ASF has 70 22 kilowatt (kW) AC charging points and a 40 kW DC charger, which the company has built in cooperation with the local energy supplier.

ASF’s share in electric vehicles should grow significantly. The plan is to be exclusively all-electric by 2025 in the city cleaning sector, where lighter vehicles are mainly used. For heavy-duty vehicles, Broglin plans to have switched to zero-emission operation by 2030.

The acquisition costs of the two hydrogen-powered waste collection vehicles – around 1.44 million euros (net), three times more than conventional diesel trucks – were covered about 75 percent by subsidies federal. A grant of approximately 925,000 euros (net) was provided by the German Federal Ministry of Transport and Digital Infrastructure. An additional grant of 150,000 euros (net) was provided through the Innovation Fund of badenova AG & Co. KG. ASF has also received funding for most of the other electric vehicles.

Alternative drive systems for heavy-duty vehicles are also on the rise at the Munich waste management company (AWM). For example, for about a year now, the municipal waste disposal company has been using the Volvo FE Electric tipper for container logistics from recycling centers to a nearby disposal facility. The 27-tonne truck is fitted with four lithium-ion batteries of 50 kWh each and crisscrosses the Bavarian capital.

AWM had already put into service a comparable vehicle with dump body and diesel hybrid technology from Volvo Trucks in 2012. “We have had a very good experience with this. Taking this all-electric truck to the next level is the logical consequence, ”says Reinhold Bauer, AWM Fleet Manager. He discovered the FE Electric at a trade fair two years ago, was immediately won over and called for tenders for its acquisition. The vehicle was subsidized at 90 percent of the cost over a diesel truck.

“Our drivers love it because it’s quiet, innovative and beautiful,” he says. The payload is over 14 tons and the range is approximately 100 kilometers. “For our special use and testing, that’s sufficient for now,” he adds. However, he says he initially assumed there would be enough fast-charging stations in the city where the vehicle’s battery could be temporarily charged. However, Bauer was disappointed to find that there is only one suitable charging station in all of Munich.

“We need 700 volts of voltage, but most charging stations are only designed for 500 or 600 volts,” he realized, after initially believing that the Volvo charging cable was broken. Even the proper charging point in itself cannot be approached: “When we drive there, we block the rest of the gas station, and the operator is naturally less than excited about this,” describes Bauer. 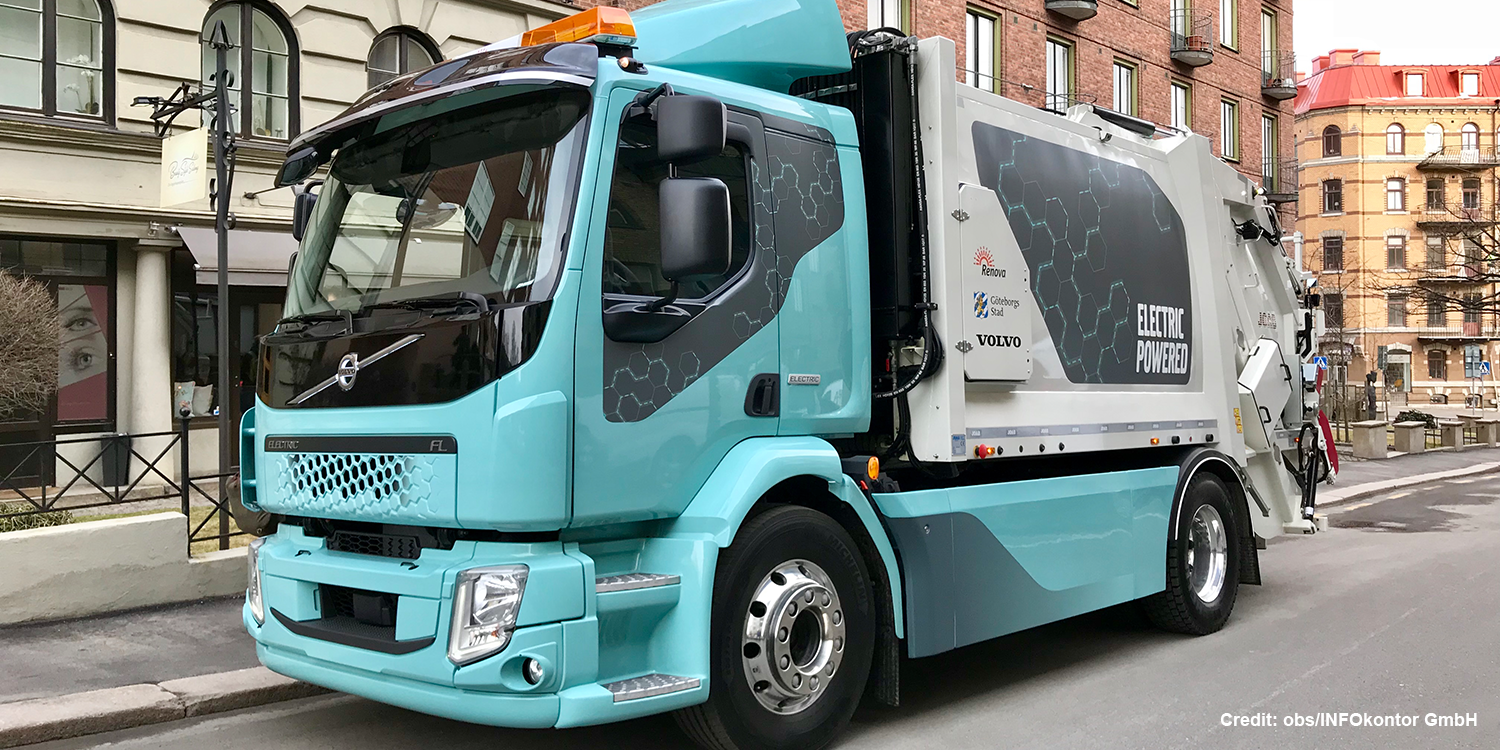 The electric dump body charges exclusively at the depot, but so far only 22 kW AC charging points are available there. Thus, in an hour, the driver brings only ten percent of SoC to his vehicle. Bauer: “We could double the range if we had our own fast charging station. One is now scheduled for the first quarter of 2022. Until then, the charging process will continue to run overnight at 22 kW. “For our drivers, autonomy is already a challenge, but they have learned to be content with the capacity of the battery or to return in time to avoid risking a stopover,” he explains.

The FE Electric RL 18 body comes from Meiller. The tipper can therefore be operated safely using a radio remote control. “This gives our drivers a better overview,” says Bauer, because in addition to protecting the environment, AWM also focuses on the safety of its personnel. Thanks to the all-electric drive, the dump body body is now also considerably quieter than with a conventional vehicle, as the hydraulic pump only operates when the dump body is actually in operation. The resulting energy savings, in turn, increase the truck’s range.

By 2030, the city of Munich and the waste disposal company plan to convert the fleet of around 250 heavy vehicles to climate-neutral drives and fuels. By summer 2022, AWM will use 64 natural gas vehicles. In addition, ten light vehicles for the collection of partially electrified household waste, built by AWM in collaboration with Mercedes, Faun and Zöller, circulate in small series. Bauer also plans to test fuel cell technology. A Faun vehicle with its Bluepower technology has been ordered but will probably not be delivered before October 2022. AWM is also taking advantage of funding programs from the city and the federal government to convert its fleet to alternative drives.

Editor’s Note: For international use cases and electric garbage truck models, please also refer to garbage trucks. One of the newer examples and long-standing models is BYD’s waste collection vehicle, now deployed in New Jersey, USA. Volvo Group subsidiary Mack Trucks also manufactures the Mack LR electric garbage truck in the United States. Across the pond, Westminster City Council and its waste contractor Veolia unveiled a fleet of 60 new and “recycled” electric vehicles in October, among the largest in the UK. This list is not exhaustive but indicates the enormous potential of electrification for waste management.

Volunteer of the Week: Carroll wears many ...