The Emirates has announced that it will reduce its weekly number of flights to Lagos, Nigeria from 11 to 7 due to $85 million in outstanding payments trapped in the country and the unavailability of forex.

Emirates said that unless solutions to its problems in Nigeria are found immediately, its decision will come into effect on August 15, 2022.

In a letter from Emirates Senior Divisional Vice President (DSVP), Sheikh Majid Al Mualla, to Nigerian Minister of Aviation, Senator Hadi Sirika, a copy of which was obtained by LEADERSHIP, the airline said said it had been difficult to recover his trapped fund. and the money was needed to run its operations.

The airline, which said the fund was growing by more than $10 million each month as its operational costs continued to pile up, said its proposal to pay for aviation fuel in local currency had also been rejected by fuel suppliers in Nigeria.

The letter reads: “It is with a heavy heart that I write to inform you of the planned reductions to Emirates’ operations in Nigeria. Effective August 15, 2022, Emirates will be forced to reduce flights from Dubai to Lagos from 11 per week to 7 per week.

“We had no choice but to take this action, to mitigate the continued losses suffered by Emirates due to the blocking of funds in Nigeria.

“As of July 2022, Emirates had $85 million in funds awaiting repatriation from Nigeria. This figure has increased by more than $10 million each month as the ongoing operational costs of our 11 weekly flights to Lagos and 5 to Abuja continue to mount. 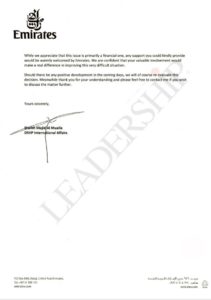 “These funds are urgently needed to cover our operational costs and maintain the commercial viability of our services in Nigeria. We simply cannot continue to operate at the current level in the face of mounting losses, especially in the difficult post-COVID-19 climate.

“Emirates tried to stem the losses by offering to pay for fuel in Nigeria in Naira, which would have reduced at least one element of our running costs, but this request was refused by the supplier.”

He further revealed that sending currency daily to run his operations in Nigeria was further affecting Emirates’ profit margins, but promised to resume normal flight operations if he was able to recover his trapped funds.

“We also need to send hard currency to Nigeria to support our own operations. Meanwhile, our income is out of reach and not even earning interest income.

“Your Excellency, this is not a decision we have taken lightly. Indeed, we have endeavored to work with the Central Bank of Nigeria (CBN) to find a solution to this problem. Our Senior Vice President met with the CBN Deputy Governor in May and followed up the meeting by letter to the Governor himself the following month, but no positive response was received.

“Meetings have also been held with Emirates’ own bank in Nigeria and in conjunction with IATA to discuss improving currency allocation, but with limited success.

“Despite our considerable efforts, the situation continues to deteriorate. We are now in the unfortunate position of having to cut flights, to mitigate further losses in the future.

“While we understand that this issue is primarily financial, any support you could provide would be warmly welcomed by Emirates. We are confident that your valuable involvement would make a real difference in improving this very difficult situation.

“In the event of a positive development in the coming days, we will of course reassess this decision. In the meantime, thank you for your understanding and do not hesitate to contact me if you wish to discuss the matter further,” Al Mualla said.