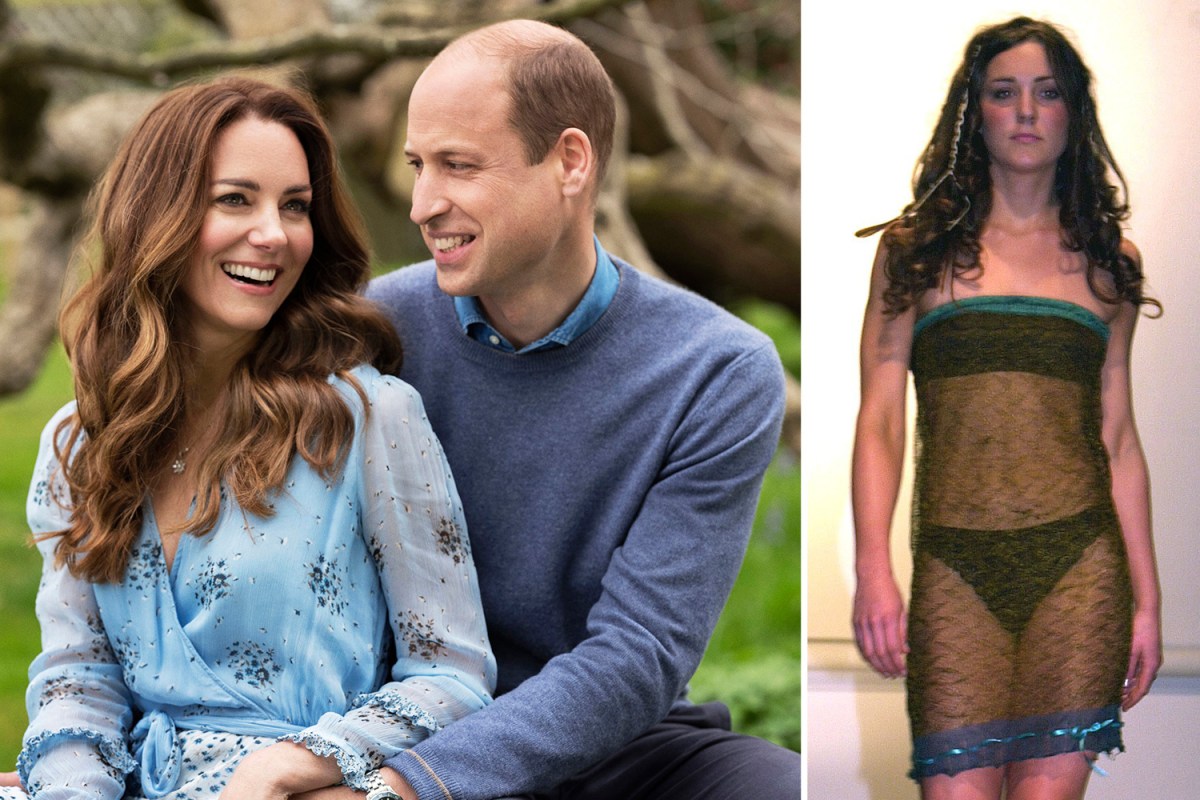 WHO would have thought that a student fashion show could be such a pivotal moment in British history?

But when Kate Middleton walked the runway at St Andrews University in a sheer black dress, Prince William said, “Wow, Kate is hot!” everything has changed between the pair. By the end of the night, a close friendship had turned into romance, and Kate and Wills had taken their first steps towards becoming our future King and Queen.

Still, Kate’s appearance at the charity fashion show could have been so different – student designer Charlotte Todd wanted her to wear the sheer skirt with a sweater, but Kate ditched the sweater, preferring to hang it up and wear it as dress. William, who had paid £ 200 for a VIP seat on the FROW, was mesmerized.

Fast forward two decades and the couple are widely seen as the future of the monarchy – more than ever since Prince Harry and Meghan Markle controversially moved to America last year.

William and Kate, who celebrated their 10th wedding anniversary in April, have been a constant source of comfort to the public – along with their three children, George, eight, Charlotte, six, and Louis, three – throughout of the pandemic. It’s easy to get the impression that Kate has always been by William’s side, but how did a middle-class Home Counties girl get Britain’s most eligible bachelor?

The fashion show was instrumental in changing the dynamics of their relationship. The couple met 20 years ago next month when they walked through the doors of Scotland’s oldest university. From the start, it was inevitable that their paths would cross – not only did they both study art history, but they also lived in the same residences, St Salvator’s Hall. Despite everything, they got off to a bad start.

“I turned bright red and kind of scuttled,” Kate, 39, later revealed. But little by little, their friendship blossomed around common interests. They had both been raised in a rural environment – Kate in the village of Bucklebury in Berkshire and William in his father’s Highgrove estate in Gloucestershire – and shared a love of the countryside (a prerequisite for fitting in in the royal family, where hunting, shooting, fishing, watching polo and going to races are the norm).

They had both been pupils at exclusive Home Counties schools – Kate attended St Andrew’s Preparatory School in Pangbourne, Berkshire, and later Marlborough College, Wiltshire, while William was in Ludgrove in Berkshire, then Eton – and shared a passion for sport. In fact, Kate first watched William when they were nine years old and playing against each other in a hockey game.

As students at St Andrews, they would often swim together in the college pool or go jogging early in the morning before class. Kate, the diligent student, would help William when he missed class by letting him copy his notes.

At first, their relationship was purely platonic as the two were dating other people – William met Carly Massy-Birch at an audition for a college play, while Kate’s boyfriend was Rupert Finch, a college student. fourth year of law, who is now married to his close friend Lady Natasha. Rufus-Isaacs, founder of ethical fashion brand Beulah.

But these relationships eventually fizzled out and Kate became William’s confidante.

She was constantly there to listen and support him, even saving him from unwanted attention. At one party he was politely trying to shake up an admirer, when Kate came to his aid by putting her arms around him and making it look like she was his girlfriend. As the girl disappeared, William told her, “Thank you very much.”

“Kate was the only girl in the room who could have done this and who William would have allowed to do it,” one observer noted.

However, it wasn’t until after the fashion show night on April 7, 2002, that the romance blossomed – and even then, they went to great lengths to keep it a secret. William was especially keen not to rush into a serious relationship, remembering the advice his mother, Princess Diana, had given him shortly before her death in 1997 that he should take his time settling down.

“Whatever you do,” she told William, 15, “first make sure the person you marry is your best friend.”

By the end of their freshman year, Kate had been invited to share an apartment with William and two other friends – Etonian Fergus Boyd, who is now Prince George’s godfather, and the daughter of Army officer Olivia Bleasdale. The four moved to 13a Hope Street in the heart of town, where they hosted regular dinners.

Real estate developer Michael Choong, who played rugby with William, said: “They never showed affection in public. Kate was good to him. She was loyal and didn’t chatter. Will was naturally sociable, but Kate was less so and hated having her picture taken. Will used to take some of his buddies out shooting.

“He would go down to Norfolk on the weekends and they would bring back game, which Kate would prepare for dinner.”

It was in their third year, when they moved to a farm on the 400-acre Strathtyrum estate on the outskirts of St Andrews, that William and Kate were finally unmasked. Skiing in the Swiss resort of Klosters, the couple were pictured together on a ski lift and made headlines.

A year later, in 2005, they were back in Klosters when William, enjoying après-ski at a nightclub, revealed his true intentions – a week before his father’s wedding to the Duchess of Cornwall, a reporter asked him if there was going to be a second royal wedding. “I am too young,” he replied. “I don’t want to get married until I’m at least 28 or maybe 30.”

Six years later – and two months before their 29th birthday – in 2011, the couple finally married. Meanwhile, Kate has been the subject of relentless attention and earned the nickname “Waity Katie”. There was also a very public breakup in April 2007 when William, feeling pressured to get engaged, instead chose to end the relationship during a tense phone call.

However, although he danced on the Mahiki nightclub table shouting “I’m free” shortly after the separation, he quickly regretted his decision.

Royal expert Katie Nicholl said: ‘They secretly met at a pub near Highgrove, where William told her he wanted to get back together. Kate didn’t want to rush anything. She had been seriously injured and told William she needed time.

On June 9, 10 weeks after their split, Army Officer William invited Kate to a loud “Freakin ‘Naughty” mess at her Dorset barracks to celebrate the end of her grueling journey as a troop leader. By the time of The Concert for Diana, which commemorated the 10th anniversary of her mother’s death, in July 2007, they were together again – and William had promised they would eventually get married.

Reflecting on their breakup during an interview with ITV to mark their engagement in November 2010, William said: “We were both very young, we both happened to be each other and were different characters – but it worked for the better.”

Three years later, he suggested that Kate go on vacation to Kenya, after slipping Princess Diana’s iconic engagement ring into her backpack.

“I had done a bit of planning to show my romantic side,” he said in the interview. “I had taken him with me for about three weeks before that and I literally didn’t want to let him go. Everywhere I went, I kept it, because I knew that if it disappeared, I would be in big trouble! It’s my mom’s engagement ring, so I thought it was pretty cool because obviously she won’t be there to share the fun and excitement. It was my way of keeping her close to everything.

“It was very romantic,” added his bride-to-be, laughing: “There’s a real romantic in there.”

A decade after their marriage, the Cambridges are closer than ever. Like any married couple, they faced their tests – including long periods of time apart when William worked as an RAF search and rescue helicopter pilot.

Plus, it took a while for Kate to find her feet in the royal family. And, of course, raising three kids isn’t easy – especially over the past year or so, and William joked that they even had a hard time home schooling.

Recently, they went through their biggest upheaval to date in the face of the fallout from Prince Harry and Meghan’s exit from the family, as well as their explosive interview with Oprah Winfrey. But throughout it all, Kate has been William’s rock, guiding him after the brothers’ relationship deteriorated.

The Cambridges know that the future of the monarchy rests firmly on their shoulders, so the pressure is on the couple to change the opinion of royalty both at home and abroad. Despite their struggles, they were never wrong and their partnership only seems to become stronger and more united.

And in a poignant celebration of their 20 years of friendship, earlier this year they returned to where it all began: St Andrews. They last visited the university in February 2011, before their wedding.

As well as meeting current students, they battled it out in wind-powered strollers on West Sands Beach. It got pretty hot, Kate teasingly shouting, “Come on, Grandpa!” to her husband, who was trailing behind. But it is William who ends up triumphing.

Joe Horsnell, a 22-year-old college student, said William and Kate “were asking what the university had done for us, for our well-being. They were here as alumni. You could tell that it was like coming home to them.

The REAL reason Kate Middleton got a nanny for Prince George – after confiding in Queen on ‘parenting struggles’, expert reveals