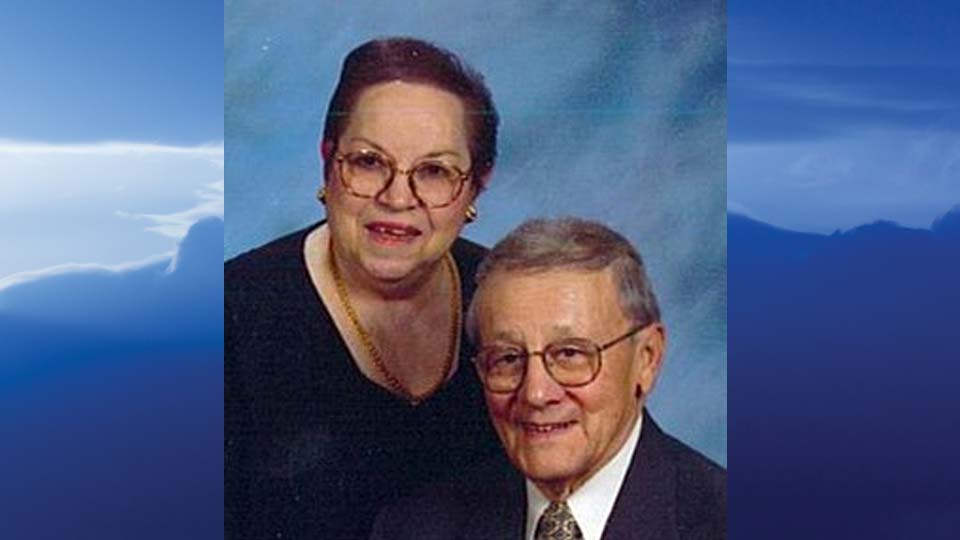 She pursued a career as a beautician for McKelvey’s. She enrolled in the New York School of Advanced Styling to perfect her craft and eventually opened a successful home salon, where she served many happy customers for over 50 years!

He was drafted in 1944 by the US military. He served in Europe until his honorable release in 1946.

James went to Youngstown State University, where he earned a bachelor’s degree in education. He then enrolled at the University of Pittsburgh and obtained a Masters in Educational Administration.

James and Mary Ann were married on October 9, 1948, enjoying 72 years of marital love! They were deeply devoted parents and grandparents. They cherished their family and friends. Their home was a haven of hospitality and love.

Mary Ann expressed her affection by spending hours in the kitchen preparing delicious meals for their enjoyment. James was always ready to offer encouragement and a helping hand. Even in retirement, he never stopped being an educator. He spent countless hours reading children’s books to his grandchildren.
Both were also fond of gardening and music, especially gospel music. James was a fan of all Ohio sports teams.

Their greatest love, however, was for their Lord and Savior Jesus Christ. They expressed it in several ways. Mary Ann served as a counselor and representative for Club 700. She was also the matriarch of New Beginning Church. James served his Lord as a Sunday School teacher, board member, and deacon. He was also recognized as the patriarch of the church, until they were both welcomed into their eternal home.

They leave to cherish their memory and their incredible legacy, their children, James (Lillian) Toti, Jr. of Boardman, Linda (Thomas) Fortini of Austintown and Robert (Tammy) Toti of Canfield; their grandchildren, Christina Fortini and Joseph Fortini of Austintown; their sisters-in-law, Mary Pantaleo of Boardman and Jean Toti of Roanoke Virginia, as well as several nieces and nephews.

James was predeceased by his parents; his sister, Mary Toti and his brother, Judge Joseph Toti.

A service celebrating their lives will begin on Wednesday, October 20, at 11 a.m. at the funeral home. Their son-in-law and pastor, the Reverend Thomas Fortini will officiate.

Regarding COVID-19 guidelines, guests are urged to wear masks and practice social distancing.

The family would also like to express their gratitude to the staff of The Inn at Christine Valley for their compassionate care of Jim and Mary Ann.

Family and friends are encouraged to offer family prayers and support by phone, SMS, email or can visit the Book of Memories at www.rossifunerals.com.

To send flowers to the family or plant a tree in memory of Mary Ann Toti, please visit our Sincere Sympathies store.