Artist Praxedes “Prax” Serrano came to the United States from his native Oaxaca, Mexico when he was 14 years old. He arrived with a cousin and traveled to New York to stay with other family members.

There, he did his secondary studies and then three years of art school at the Cooper Union, where he learned fundamental concepts, rules and realism. He then made his way to Long Beach Island, where he found his own style, rooted in his personal and cultural experiences.

In her Ship Bottom workshop, the artist talked about her motivations for creating – expressing her imagination and celebrating her culture – and strong sensory memories of her childhood on a farm in rural Mexico: banana and mango trees, armadillos and hummingbirds, hibiscus flowers of different colors. Some blooming flowers heralded a holiday.

“You keep things forever, ever since you were little,” he said. “It just stays in your mind.” 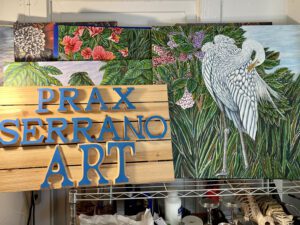 At first, Serrano made art with whatever supplies he could find, he said. As a teenager and new to the United States, he sat and sketched people in busy subways. In the summer, he started coming to LBI and working in restaurants.

As a young man he felt a strong connection to the place, he said, and around 2000 he was living on the island full time. He met a lot of people at The Gateway in Ship Bottom, where he worked for 13 years; he also worked at The Arlington and Surf Taco.

He always felt the desire to paint, he says, but he didn’t know where to start. Then, about 10 years ago, while doing some soul-searching, he pulled out his small collection of art supplies that he had hidden away for “one day” – and he got to work. .

He immediately had ideas that he wanted to express visually, about his culture and heritage, the local life of the island and the oceans of the world. He has always been captivated by underwater imagery, he said.

Serrano recreates his imagined scenes on large canvases, approximately 4 feet in diameter, layered with rich, bold colors and stylized subjects. He works big, he says, because he wants to put the viewer right in the middle of the scene – an invitation to go for a swim or get lost in the leaves. 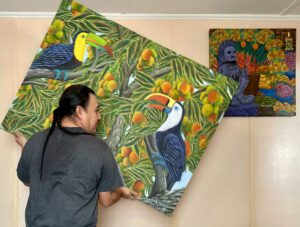 FERTILE LAND: In the artist’s imagination, the themes of life and the afterlife intertwine in tropical hues.

Tropical toucans and New Jersey shorebirds are at the forefront of his work; lionfish and crayfish; sea ​​turtles and mermaids; pieces of experiences and stories from long ago. In its vibrant landscapes and seascapes, flora and fauna intertwine with memories of its rural upbringing, traditions and beliefs.

“I want to do a painting that I have a feeling for,” he explained.

A recent favorite is a tribute to el Día de los Muertos, or Day of the Dead, and el Día Todos los Santos, or All Saints, a holiday that is dear to him. In the foreground is a seated statue of Xochipilli, the Aztec god of art, games, music, flowers and dance. Surrounding the statue are bouquets of flowers arranged in an arch and in terracotta pots, candles, and offerings of fruits, vegetables, and other gifts. The cold, hard stone of the figure is offset against the lush background. 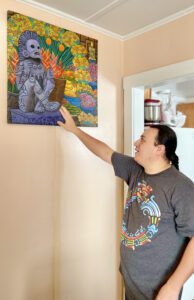 GREAT BEYOND: His rendition of Day of the Dead took a while to come out, he said. The act of painting itself is a way of honoring loved ones who have passed away.

He imagined the painting for years before bringing it to life. “It took a while to come out,” he said.

With his brushes, Serrano achieves many and varied textures, with “as much detail as possible”. He often paints water – shallow pools, moving streams, rushing waterfalls – and rocks, feathers, shells, leaves, flesh and coral reefs.

He usually works in the middle of the night or before dawn, when the world is quiet.

“I have to concentrate while I paint,” he said.

He enjoys the process of experimentation and trial and error to hone his skills and discover new techniques. This is how mistakes can become blessings, he said.

Serrano doesn’t do much art in the summer, busy as he is in commercial kitchens 10 to 12 hours a day. But in winter, there is more time for artistic activities. 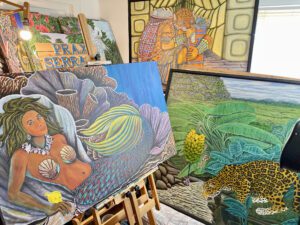 He spends an average of two, three, even six months on a painting. He never really “finishes” a piece so much as he gets tired of working on it, he said. But when his painting looks like the original image in his mind, he’s ready to move on.

“It’s a kind of love that you develop,” he said. “You fall in love with a work of art.” 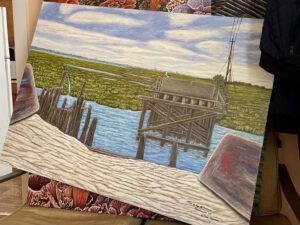 NEAR HOME: The so-called Bridge to Nowhere is a beloved landmark in the Stafford Avenue swamp in Manahawkin.

His first was a Causeway Shack painting, which has since sold. A few years ago he painted the Bridge to Nowhere seen from the end of Stafford Avenue.

Another shows an eagle descending from Eagle Mountain to catch an iguana in its talons. Sunlight on the bird’s head and wings makes it stand out against the dense greenery of the mountains. The iguana wears a blank expression, unaware of its impending demise. “El Jaguar” shows a wildcat leaning down to sip a stream of fresh water near the base of a pyramid. 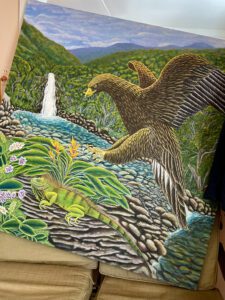 LUNCH LIZARD: An unwitting iguana is about to serve a meal to a majestic eagle.

Serrano’s paintings all have in common a marked tranquillity, passive wildlife and meaningful moments. Serrano is of indigenous lineage, traceable back to ancient civilization, much of which he fears is forgotten; his paintings give permanence to history and symbols.

Her work is available at the Firefly Gallery in Surf City and Maristella’s Luncheonette in Ship Bottom.

His goal is to get his paintings into more galleries, but he’s unsure how much his subjects and style resonate with local audiences. Soon, he plans to explore clam and oyster shells. For now, his works fill his home studio and walls.

“I just know that one day they will find a place to go,” he said.