She wears braces, has a face that belongs in high school, and displays a playful spirit.

So some are surprised to see her driving with Lake Coeur d’Alene Cruises. A few asked if she was old enough to drive.

“I try to joke about it,” she said. “I try to crack jokes here and there, like, ‘I’ve only been captain for 25 minutes.’ And then I’m going to be docked and say, “Like not bad for 25 minutes. I watched the YouTube video.”

But it’s not his youth that makes Demery different in this masculine realm.

She is the only female captain of Lake Coeur d’Alene Cruises and the first woman to captain The Mish-an-Nock and The Coeur d’Alene. They are the largest boats in the fleet at over 100 feet long and able to carry up to 400 passengers.

Born in Coeur d’Alene and raised in Post Falls, Ted and Michele Demery’s daughter has two older brothers. She therefore grew up in the fight and learned very early to fend for herself.

When she graduated from Post Falls High School in 2016, she wanted to travel, so she went to work with American Cruise Lines. In two years, she went from Maine to Florida and down the Mississippi River and through the Panama Canal.

It was then that she set her sights on steering the boat.

“I completely fell in love with it,” she said.

But first, she wanted to come home and be on the water. In 2018, she went to work with Lake Coeur d’Alene Cruises. She worked as a deckhand, studied the trade and rose through the ranks.

To become a captain, she had to spend 60 days on a US Coast Guard-certified vessel and pass physical and written tests.

“It’s pretty grueling, but definitely worth it,” Demery said.

In 2019 she earned her captaincy and started on the smallest 65ft boats in the fleet, The Osprey, The Kootenai and The Spirit of Coeur d’Alene.

This summer, she began ordering Mish-an-Nock and Coeur d’Alene. Demery operates three and four daily outings on Lake Coeur d’Alene, the St. Joe’s River, the Spokane River or transports people by boat from the Coeur d’Alene Resort to the Hagadone Events Center.

Some are sightseeing cruises, weddings, birthdays and anniversaries. All have people on board who want to have a good time.

Demery does its best to deliver.

“It’s the best part of my day,” she said. “I love seeing people happy. And I love being on a boat and moving it around.

Perhaps it’s best when the little girls walk past the wheelhouse, see her behind the helm of the boat, and enthusiastically remark “a female captain!”

“I love it,” she said. “That’s the best part for me is when these little girls come in. And then, if I have time, I bring them in and show them that they can spin the wheel like me. They can do what I can do.”

Being the captain isn’t all about fame. Passenger safety is the priority. She and the seven other captains of Lake Coeur d’Alene Cruises are responsible for hundreds of people every day.

Challenges await you on the water.

When there is wind, docking is difficult. She must constantly be on the lookout for other watercraft, skiers, wakeboarders, paddleboarders and even the occasional moose swimming in the Saint-Joe River.

“All of a sudden he decided to start swimming in front of me,” she said. “It was like the craziest thing I’ve ever seen.”

She avoided it by shifting into neutral and waiting for the animal to be safe.

Demery must stay the course, manage his time and respond to calls. And she manages it all while often providing running commentary on the history and geography of Lake Coeur d’Alene.

“I live five minutes down the road from a huge 25 mile long lake. It’s crazy,” she said.

Demery enjoys the opportunities his role gives him to interact with clients.

“You have to keep them calm and relaxed,” she said. “Keep joking. »

Demery lives in Coeur d’Alene and has family nearby.

“You can spend the day on the water, get some sun, but then go home with your dogs or go see grandma and grandpa,” she said. “You don’t miss all these events. You’re always in the town where your family lives.

Demery didn’t spend her youth on the water, but remembers being fascinated by it. During her college years, her grandparents took her to the Oregon coast.

“I pretty much just sat there all this vacation watching the freighters go by,” she said. “I’ve always had this passion for boats and ships.”

Her time in the cruise industry also opened doors for her.

“It allowed me to see a lot of other things, and that’s when I really thought, ‘I want to do what they do. I want to drive this boat. 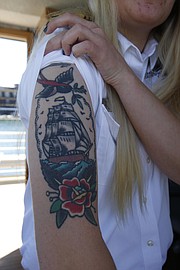 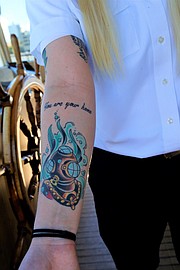